When Dr. Crolly came to Armagh in 1835, he found the ancient City of Schools fallen on evil days. Not a single Catholic College, or School, or anything deserving of the name, save perhaps an occasional rude classical hedgeschool.

In 1836 he organised a diocesan collection for the erection of a Seminary, procured a site on Sandy Hill and began to build at once. The cost of the completed building proved nearly double the amount of the original estimate; but to keep the good work going, Dr. Crolly generously advanced £600 from his own private means. The opening of St. Patrick’s Seminary in 1838 was a very modest one, the total attendance being 12, three of whom were candidates for the priesthood. However, the blessing of God was with the work and before the end of that year there were 55 pupils on the College register.

In 1861 Dr. Dixon entrusted the management of the Seminary to the Vincentian Fathers, who have ever since ably and successfully conducted the institution, most of the teaching staff being provided from their own ranks. The arrangements provide for the Education of day-pupils as well as boarders; the Seminary has ever had for the leadingpurpose, in accord with its founder’s intentions, the preparation of clerical students for Maynooth College. The material most desired would be intelligent lads who have just finished a good national or corresponding school course; such are prepared for the Intermediate and Royal University of Ireland, a sound general training being always secured. For the encouragement of talented boys in families of limited means, a large number of Entrance Exhibitions, amounting to £10 a year for a three or four year course, are open to competition each term.

The average course in St. Patrick’s College is a threeyear one; and for several years a regulation has been in existence requiring the clerical students of the Archdiocese to spend at least two years there before entering Maynooth, or any foreign ecclesiastical college.

Most of the clergy of the Archdiocese, and a great number of the laity, have received their early education in this College. It comprises now quite an extensive collection of buildings a stone’s throw on the S.E. of the Cathedral, about equidistant from it and the Archbishop’s House-the ecclesiastical ideal of a Seminary site. It is a breezy sunny spot on the south side of the magnificent Cathedral Hill and has proved a singularly healthy situation. There is an abundant supply of electricity for lighting and experimental purposes, ample recreation grounds for fine weather and a large covered playhall for inclement days; while in regard to material comfort, the good fathers are so careful and employ their limited means so well, that their pupils of late years find even Maynooth College itself, with all its modern improvements, scarcely superior to the modest Seminary where their first college days were spent.

The above is an extract from “Guide to St. Patrick’s Cathedral, Armagh” published by Robert P. McWatters, Upper English Street, in 1905. 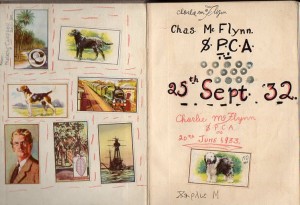