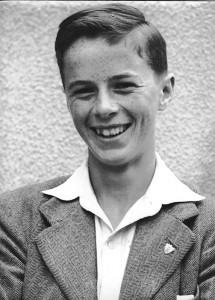 My mother always wanted a camera. She never got one but she got me my first. I took many photos during my years in Armagh mainly of Sports, Plays, Classroom gatherings, Groups and Individuals. Initially I developed them in the Dark Room situated between 2 classrooms in the new wing. Father Mornaghan (To-Jo) was my mentor.

Later when I found there was a demand for team photos and individual photos I got one of the Day Boys to take the films to a chemist downtown. They printed the photos for 2d and I sold them for 6d. I can’t remember anybody else being interested in photography then or anybody claiming I was ripping them off.

I found the negatives for most of these in my attic hidden for over 50 years. With modern technology I was able to view them and print them. Enjoy the memories they bring. The times weren’t all bad as John Montague and one or two others say. Mostly everybody in the photos are smiling and happy.

Who had not spent their time in the trenches.

We grudged their going home to a warm fry

And a soft bed with, perish the thought,

An unmanning kiss from one of their parents!

Despising, we still learned to use them,

And later, of course, love’s messengers.